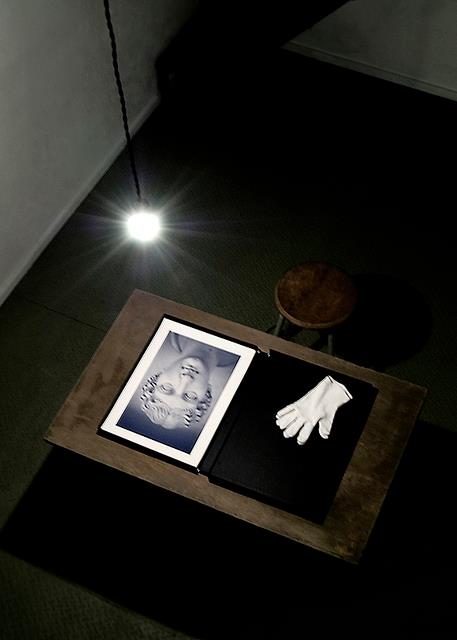 With a pure XV century style, the big Zavattieri’s wunderkammer is today full of wonders. It is composed by the anomalies of the “Botany” cycle, compounding the naturalia large section, the artificialia section with the more recent cycle about U.F.O. ambiguous sighting, and the precious finds of “The Ancient Romans”. Through these sections, the artist’s iconography becomes a homage to the rising photographic industry of the half seventh century that joined science and conjuring between copper and silver nitrate with a pioneering spirit.
It was showed for the first time in May of 2010, “The Ancient Romans” is composed of a minimal and powerful mounting. In order to welcome the spectator there are an old bad condition desk equipped with a stool, two white gloves and a warm weak light. Nine Roman’s age celebrities portraits (or assumed to be them) are placed one over another on the desk, in form of an elegant portfolio to look up with care. Zavattieri took them at the Museum of Roman Civilization in 2000 in Rome. Only in 2005 they were edited and printed through a simulating process of the original tones of the cyanotype printing introduced in 1842 by the English scientist and astronomer John Herschel.

“The Ancient Romans” is a deep consideration of the art portrait history and basically of the introduction of the physiognomic expression at the expense of that closed stylistic and mathematical unit that rules every single part of the body.
The realistic portrait of art had its total development just in the Roman age against those basic canons of the Greek art up to half of the fifth century. Then the individual physiognomic expression did not have yet the right of citizenship.
This type of portrait modifies the spirituality, feeding the will to give a strong characterization to portraits through a process going from the misshapen. All those aspects rank as grotesque and abnormal, such as the apotropaic masks, the portrait comes to individual connotations creating an improbable detachment between the impersonal bare body abstractedness and the physiognomic realism of the head.
Then the old language logic need changes now to a mere traditional iconographic element. It is like a “fixed expression” to use it as such decoration architecture schemes without any recollections of their origins.
In the collective imagination the portrait is often understood as a mechanical reproduction of individual features. For example, when we imagine a historic personality we unconsciously base our imagination on his most famous portrait that we perceive as a truth. Indeed this is a suggested truth and very often it is intentionally imposed. It is about rather a representation that inevitably is affected by the interpretation and the intentions of the author as well as the age stylistic dictates. It is suggesting how the whole human visual experience made by the individual through the history would be reviewed at all. The need of maintaining the memory, building a sort of a big visual anthology, joins the time violence into a play. This is a play multiplying the representation freeing it from biographical and identity data. So it becomes a pure viewing fascination for the pictures postcard filing that is able to misrepresent the history. We see a history that Zavattieri rebuilds through camouflaging documents that, in an absolutely failing way, transform the time in a very pure abstraction.

* In the second half of XIX century the photo duplication introduced the photomechanical processes to the large scale copy. At that time it was published the early examples of illustrated books about the Egyptian and Middle-eastern collections. The albums, or portfolio, were the early examples to replace the records to classify the real archeological finds depending on dates or types. However, in the texts accompanying the reproductions it was stated that the pictures were not mere illustrations and the unique photographer’s point of view gave an expressive personal view. So that since 1870, the photo index became the modern counterpart of the cabinet of curiosities. A lot of the early photographers (Talbot, Llewelyn, Humbert de Molard, Brébisson) in their student period had a great interest in the indexing science, in Botany, Biology, Archeology, Geology and Anthropology. For this reason, since that time the photography represented the main index system and also the museums began to take pictures of their own collections, such as the British Museum of its collection of Roman emperors marble busts.

* Historical information based on: A New History Of Photography – Michel Frizot Publisher – Könemann.