Standing Waters is the first of a series of artworks that leverage stereoscopic photography for giving the illusion of the third dimension.
It shows a picture shot at the Park of the Golden Head in central Lyon (France), so called because of the legend claiming that a life-size golden head is buried under it: it’s amazing to notice that the suggestion of a legend, which is an ephemeral and unfounded thing, is so powerful to influence the naming of something tangible and objectively real like a physical site – even if nobody has actually ever found the treasure.
To obtain a stereoscopic effect, the picture was divided in parts and mounted on the sides of a structure made of prisms and mirrors: thanks to the reflection, a third virtual image is projected on the bottom of the box, simulating a 3D effect. The public can enjoy it by looking at the top central part of the box. 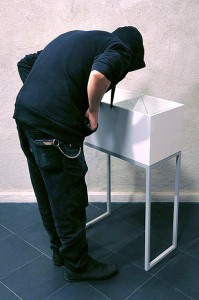 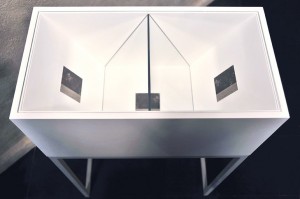